Columbia Sportswear is an American sportswear manufacturer, headquartered in Portland, Oregon. It was founded in 1938 by Paul und Marie Lamfrom, initially as a small hat business named “Columbia Hat Company”. In 1970, their doughter Gert Boyle took over the leadership role of Columia Sportswear. Her role as “Tough Mother” lives on in the Columbia brand. The brand is still guided today by her legendary perfectionism (“It’s perfect. Now make it even better.”) and the high standards she set for herself and for others.

Columbia Sportswear deals with outdoor clothing and ski fashion and the products are distributed in 100 states through more than 13,000 retailers. 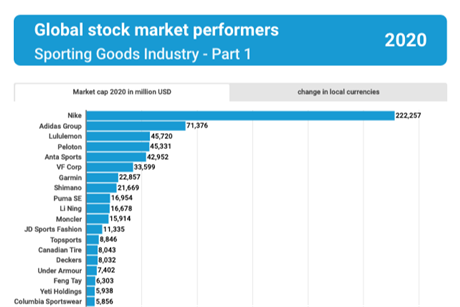 This exclusive chart shows the ranking of the largest listed sporting goods companies in 2020 by market capitalization. The chart can be downloaded in JPG, PNG or PDF format. This is exclusive data for Premium Members. 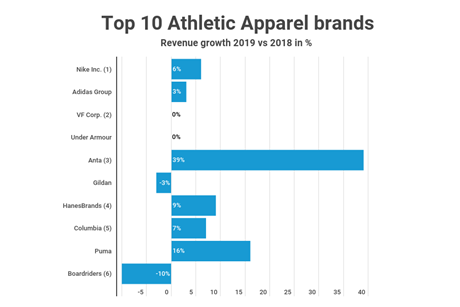 This exclusive chart shows the leading international sports apparell brands, including Nike, Adidas, VF Corp., Under Armour, Anta, Hanesbrands, Gildan, Puma, Columbia and Boardriders. Ranking by Revenue and by %-growth vs last year. This is exclusive data and analysis for Premium Members.