UA scales back plans for its new global headquarters

Under Armour plans to have a new headquarters in place by 2025 on the 50-acre waterfront property it acquired in Port Covington, South Baltimore, from Kevin Plank in 2016. Its design takes its cues from the pandemic’s lockdowns, mixing office with home working, and scales back initial plans for nearly 4 million square feet of office space with a 100,000-square-foot manufacturing hub and 7,000-seat stadium. While the previous project was meant to accommodate 10,000 employees, the new one is set to allow on-site presence by ony about 1,000 people an any given day. Consolidating various facilities used by UA in the area, the future five-story office building will measure 284,000 square feet.  Adjacent to it will be a 30,000-square-foot store and a complex for athletics, with a track and multi-sport field that meet NCAA standards, enough bleachers to seat 1,400 spectators, and indoor basketball courts. The sports complex will be open to employees and, under certain conditions, to the public. UA will be disclosing further details late this year or early next year. The company employs about 1,700 in Baltimore but last year announced plans to lay off an unspecified number of corporate employees, budgeting about $135 million for contract termination and other restructuring costs. 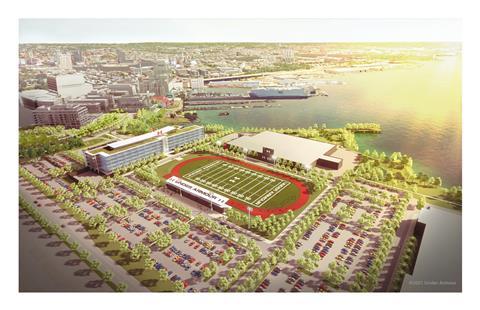