We apologize for a mistake made in an article yesterday about the running market in Germany and the four other major European countries. We run the article here again with a different first paragraph:

According to NPD, the total European market for athletic footwear and apparel suffered an overall decline in consumption of 10 percent to €28.6 billion in the five major European countries last year, due to the coronavirus pandemic. However the running category, which is the biggest category in the performance segment of the market, declined by only 3 percent to €4.2 billion.

Running suffered a small decline in the U.S. as well last year. In Europe, the running footwear and apparel market declined as an immediate reaction to the first wave of retail lockdowns in the spring. It enjoyed a recovery after the first shockwave, but it was not quite sufficient to make up for the initial bump.

There was a slight increase last year in Germany, which accounts for almost one-third of the European “Big 5” area in running, according to the market research agency. While sales of running shoes remained relatively flat in Germany at around €700 million, those of running apparel grew to an estimated €505 million, especially because runners spent more on warm clothing in the last months of the year.

Average selling prices went up for footwear, and NPD experts feel that the shift to higher price points may have become permanent. Most purchases were made in the €100-200 range per pair, based on a survey of 10,000 runners made by Runner’s World in Germany, which placed the average price at €130, adding that German runners owned 6.2 pairs on average and bought on average 2.8 pairs last year. The magazine also said that the average spending on running apparel went up slightly to €296 in 2020. 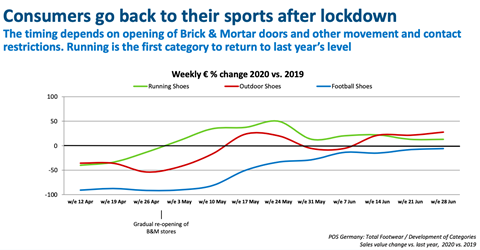 As previously reported, On Running’s Cloud model became the best-selling franchise in the German performance running market last year, followed by the Brooks Ghost, two Adidas styles and one by Asics. The survey conducted by Runner’s World revealed that only German 35 percent of German runners don’t care about sustainability in the footwear they purchase. The others elected Adidas as the most sustainable brand.

The German running market picked up by about 50 percent in May, after retailers of non-essential goods were allowed to reopen their stores. The share of purchases made online in this category jumped by 58 percent in March and April because of the store closures, but it fell to a level of around 30 percent in May and June, said NPD.

Runner’s World said that generalist sporting goods stores remained the most important sales channels in the running market in 2020, in spite of Covid-19, representing 84 percent of all purchases, followed by running specialty stores. According to NPD, the digital channel represented 36 percent of sales for the whole year, compared with 29 percent in 2019.

The running market rose earlier than the outdoor market in Germany, but trail running gained market share for the year as a whole, representing 21 percent of the performance running market as compared to 15 percent in the prior year.

Running picked up speed later in 2020, involving for the first time many new participants who were unable to practice other sports. Outdoor activities and sports like running, home fitness and cycling – combined with a general desire to keep moving and to stay in shape as a protection from Covid-19 infection - helped to raise the overall level of sports participation in the country. The share of the adult population that did not practice any sports fell to a record low level of around 20 percent compared with about 45 percent before the coronavirus outbreak.