Green Room, an experimental design agency based in Birmingham, has partnered with footwear and apparel brand Hoka to develop a new global store concept that has been launched first in China and Southeast Asia. The partnership has developed a community-focused retail concept that will be rolled out in multiple locations and formats around the world, from flagships to concept stores, shop-in-shops, pop-ups and outlets.

The stores place a strong emphasis on connecting with nature – both in terms of furnishings and atmosphere. At the heart of this is a treadmill for test runs, completely surrounded by hyper-realistic digital scenery that moves around the runner, immersing him or her into the great outdoors. In addition, the stores are designed not only as a retail space but also as a hub for the local running community, offering a variety of additional services and events.

Green Room has also created a Hoka Retail Playbook and Digital Playbook for seamless global rollout in local markets to ensure that the integrity of the brand and original creative intent is maintained across all Hoka stores. The partnership between Hoka and Green Room was launched in May 2021.

Hoka, now owned by California-based Deckers Brands, originated in the French Alps. In 2009, trail running pioneers wanted to create a shoe that made running downhill easier. Today, Hoka shoes are sold in 60 countries around the world. The company’s headquarters are located in Goleta, California. 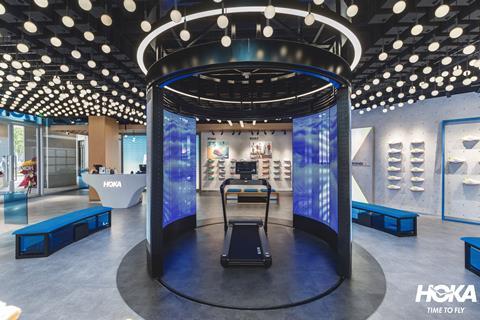 Tredmill surrounded by screens at the new Hoka Nanjing store