The Swiss Conzzeta Group had first announced on Dec. 9, 2019, that it would focus in the future on the sheet metal working segment, called Bystronic, and it recently confirmed the reorganization by renaming itself as Bystronic. After the sale of its Schmid Rhyner ioperations in early 2020 and the FoamPartner business unit in March, the company has now found a buyer for its Mammut business unit, which has been part of the Conzzeta Group since 1982.

On April 26, Conzzeta announced the signing of a binding agreement to sell its outdoor division to Telemos Capital. The price being paid for the acquisition, which should be concluded before the end of the second quarter, has not been disclosed. The Mammut business contributed 218 million Swiss francs (€197.2m-$238.9m) to Conzzeta’s sales in 2020. The first quarter of this year saw its sales progress by 26.9 percent in reported terms and by 28.2 percent in constant currencies, reaching CHF 64.5 million (€58.6m-$70.1m).

Based in London and founded in 2017, Telemos focuses on equity investments in a limited number of private companies in the consumer goods, healthcare and business services sectors across Europe. Funded by family capital, Telemos says it prefers active, long-term participation in its investments and typically seeks to deploy €50 million to €200 million of equity per investment. In consumer products, the company’s portfolio currently includes a DTC brand of “sexual happiness products” called Lovehoney, plus healthcare providers such as MedEuropa and Sanoptis. Besides, the firm has invested in a leading distributor of construction materials, MaxBau.

Telemos Capital is led by its founder, Philippe Jacobs, who is also a co-chairman of Zurich-based Jacobs Holding, an investment firm founded in 1994 by his late father Klaus J. Jacobs, a member of the Jacobs Suchard “dynasty,” famous for its Swiss chocolate. Jacobs Suchard was sold by Klaus J. Jacobs to Kraft Foods/Philip Morris in 1990. Since then, the family has retained a 30 percent stake in a chocolate manufacturer, Barry Callebaut, but it has also invested in a couple of dental groups, among others. In the past, it also has acquired shares in Infront Sports & Media and Adecco, but then cashed out of both investments in 2011 and 2014, respectively.

The divestment of Mammut, a company founded back in 1862, will complete the streamlining of Conzzeta’s strategic portfolio. In March, the company had already announced that given the rapid progress in the strategic transformation of the group, the previous management structure will no longer be required and that several members of Conzzeta’s executive committee, including Oliver Pabst, Mammut’s CEO, would be led to resign as part of the transformation. However, a spokesperson for Conzzeta said that Pabst is expected to continue to run the Mammut Sports Group. He succeeded Rolf Schmid at its head in 2016 after steering the German-based Bogner business.

With Telemos, Mammut is gaining a new, strong partner who will help the Swiss mountain sports specialist to further develop its business model. This primarily concerns the three areas of products, (digital) channels and growth in new regions. According to Conzzeta, Telemos has made a clear commitment to the strategy adopted by Mammut, including the expansion of its leading position in digitalization and sustaiability. It believes in the brand and the development of mountain sports. It will preserve Mammut’s Swiss core and its premium positioning in the market. 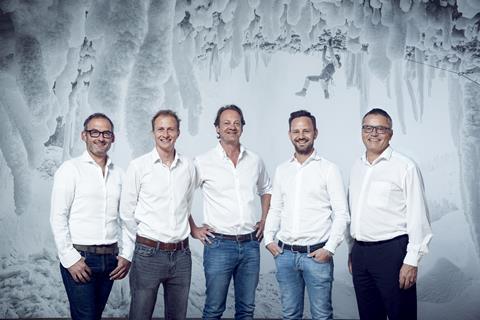