Following the official approval of the project, the ground-breaking ceremony for Surftown MUC is scheduled for the autumn of 2021, and its completion is planned for the summer of 2023. Located near Munich, the new complex will comprise a 20,000-square-meter surf pool as well as a 29,000-square-meter multifunctional hybrid building with offices, restaurants and retail stores called “Hybrid One.” An outdoor fitness arena, an area for childcare as well as sunbathing and lounge areas are also planned. The surf pool will have enough capacity for 700 active surfers per day. The technology for the wave pool comes from a Canadian company, WhiteWater West, which opened its sixth branch in Munich in 2020. Using a pneumatic chamber system, the artificial waves are created by converting overpressure into wave energy. The plant is technically optimized for CO² neutrality and sustainability: The electricity required will be generated from renewable energies, mostly from the company’s own photovoltaic systems. Chris Boehm-Tettelbach, who is the initiator and founder of Surftown MUC, is partnering with Michi Mohr, a well-known German big-wave surfer, and with Conrad Albert and Jonas Boehm-Tettelbach, co-founders and members of the core management team of the new company that will run the complex, Surftown Hallbergmoos. Other key backers of the project are Gerfried Schuller, founder of the Blue Tomato chain, and a couple of financial experts. The company is considering similar projects elsewhere in Europe and the rest of the world. 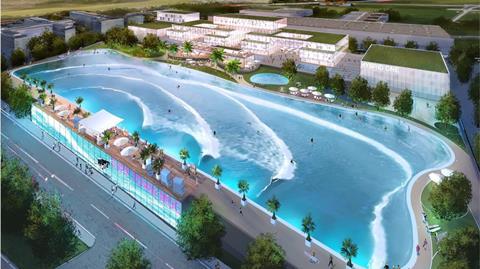