Working through a local subsidiary, VF Northern Europe, VF Corporation has begun operations at its new fulfillment center in Bardon, Leicestershire, which will employ about 250 people at peak times. The new 55,800-square-meter center will have “state-of-the-art automation capabilities putting it at the forefront of the footwear and apparel industry,” says VF, stating that it will enable the group to provide more efficient distribution services to the wholesale, e-commerce and retail customers in the U.K. of three of its brands, The North Face, Timberland and Vans, serving nearly 90 percent of the market within one day. Core features of the center include direct flow of parcel shipments with a capacity of 200,000 units per day, using 18 stations with a capacity of 170,000 units per day. The building also has several environmentally friendly features such as low-water-use fixtures and electric solar panels. The building design achieved a BREEAM “Outstanding Rating.” In 2019, VF had already strengthened its presence in the U.K. with the opening of a new business hub in London, followed by the opening of new Timberland and Vans flagship stores in the city. The U.K. is the most important market for the group in EMEA. 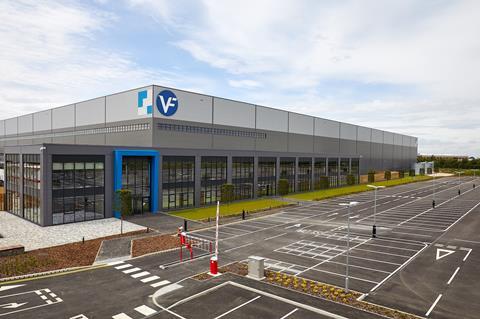