Tel Aviv is the city where Puma has just inaugurated its largest store since the opening of its flagship in New York City two years ago. Spreading on two floors, the 700-square-meter store is located on the Old Port promenade close to the waterfront of Tel Aviv. It features a Puma Hoops area, an interactive digital footwear experience, a Formula 1 simulator and a product customization space, among others. A local artist designed a central art piece on “Where the sun rises,” combining the Puma cat with the basketball champion Walter ‘Clyde’ Frazier and an image of the harbor. A few days before the inauguration of the company-owned store, a smaller one was opened in the Golden Mall of Tel Aviv by Puma’s local distributor, the Irani Group. Green Room, a retail design consultancy based in Birmingham,says it worked with Puma and Irani to make the flagship store as experiential as possible, using gamification, AI and projection technology to “bring product trial to life,” covering also activation for the launch of Puma’s new Future Z boot, which will be worn by Neymar Jr. It already did something similar with the Puma store in Sydney. Notably, the latter features a social “hangout” space primarily focused on football-obsessed teens (FOTs), their impulses and their purchase decision-making process. 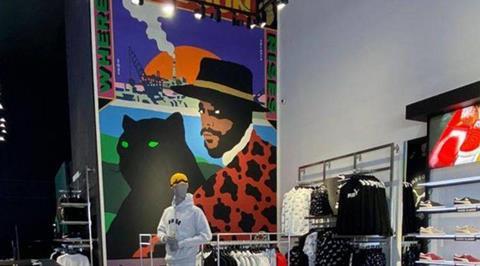