Cross-Border Commerce Europe (CBCommerce), a Brussels-based platform promoting cross-border online commerce in Europe, has examined and evaluated the 16 strongest European countries in terms of both consumer behavior and business performance in cross-border online shopping, which generated sales of €146 billion in 2020 (excluding the travel segment) in the EU, an increase of 35 percent year-on-year.

Part one of the study identifies the development of online shopping habits of Europeans. For 2020, tiny Luxembourg leads the list like last time, apparently due to geographical reasons. Climbing countries were the U.K. (4), Sweden (9), Belgium (7) and Germany (10). Dropping down in the ranking were Denmark (5), Norway (8), Spain (11) and Switzerland (6), as well as France (13), which slipped four places as compared to the last report. The countries that retained their positions were Luxembourg (1), Ireland (2), Austria (3), Italy (12), Finland (14), Portugal (15) and the Netherlands (16).

According to the study, consumers see the biggest obstacles to cross-border online shopping as being delivery times and misdelivered goods, damaged items, and the associated return policy. In the wake of the Covid 19 pandemic, the logistical challenges have become even more apparent. We would add the problem created by the geolocalization functions of many web stores.

The second part of the report by CBCommerce lists the ten countries with the best performing cross-border webshops and marketplaces (top 3 listed by size):

3. Netherlands with C&A, Vistaprint and Philips

6. France with Decathlon, Moncler and ManoMano

10. Spain with Zara, Mango and Bershka

The report also shows a negative impact of Brexit on cross-border trade in and with the U.K.

Important to know: The EU VAT Reform for online trade within the European Union - part of the jointly agreed digital bundle - will come into force on July 1, 2021. From this date, VAT will be due in the country of destination for largely all cross-border deliveries to non-business customers in the EU, affecting in particular trade between the EU and the U.K. The previously applicable VAT delivery thresholds in the EU will be abolished for cross-border B2C trade and - beyond a micro-entrepreneur threshold of €10,000 - tax amounts will be due directly in the country of delivery. With regard to the low threshold, the new regulations apply to largely all cross-border supplies to non-entrepreneurs in the EU. 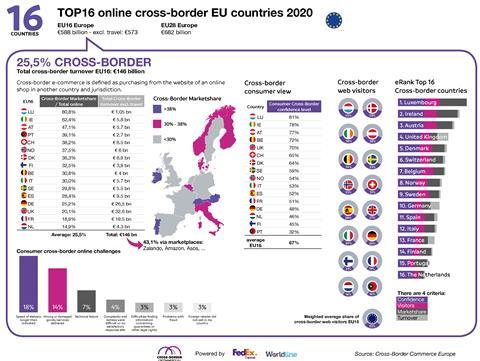