Supporting Nike’s position in the case, a federal district judge in Brooklyn moved quickly to issue a temporary restraining order against the MSCHF Design Studio, forbidding it from fulfilling any orders for the modified “Satan Shoes” version of its Air Max 97. The defendants in the case said they had already sold all but one of the 666 pairs produced for the March 29 release, withholding the last one for a later raffle. They said they had already shipped the majority of the sneakers, but Nike’s lawyer questioned whether so many orders might have been fulfilled so fast. The black and red Satan Shoes bore the Swoosh as well as a “Luke 10:18” mark, referring to a passage of the Bible on Satan’s fall from heaven. MSCHF argued that they were “not typical sneakers, but rather individually numbered works of art” like the company’s previous “Jesus Shoes,” which were based on the same model and released in 2019. They wanted to make the point that everybody – even Satan – can do a collab now. Nike claimed that it suffered irreparable damage from the latest release, adding to the already significant confusion in the marketplace. 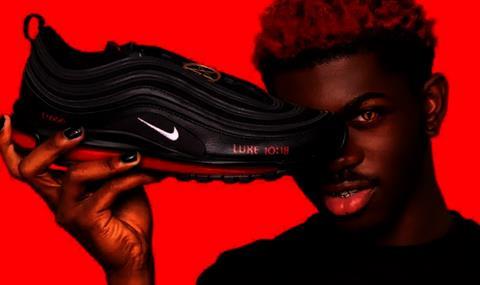