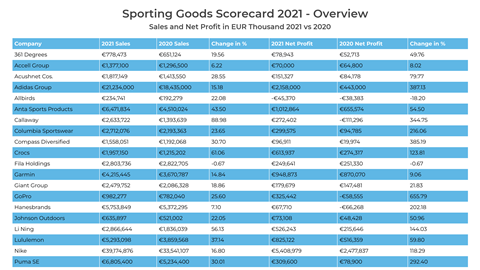 Sporting Goods Scorecard 2021 - The top performers by sales and profit

With our exclusive Sporting Goods Scorecard, we give you an overview of top performers by sales and profit. Find out about the winners and losers in the industry. The Scorecard includes the revenue and profit development of all major global sporting goods brands.

As the world began to recover from the COVID-19 pandemic, consumers embraced footwear, apparel, sporting goods and outdoor products and industry profits recovered nicely after a difficult 2020. SGI Europe’s inaugural Scorecard shows the Return on Sales in 2021 was 11.3 percent versus 5.2 percent in 2020. Total revenues for the group jumped 20.5 percent to more than €134.4 billion from €111.6 billion the year prior. Profits were 165.2 percent higher in aggregate to more than €15.1 billion as all but two entrants—Rocky Brands and Allbirds—reported more net income in 2021.

These are the results of our first annual survey of 26 global public companies that report their yearly results for the 12 months on or near Dec. 31. In Nike’s case, the figures represent total sales for the 12 months ended Nov. 30, which is the closing date of the company’s second financial year quarter. All reported results that were not reported in euros were converted to the currency at the average rate for the year*. We opted to exclude On Holding from our inaugural scorecard since the Swiss company was not a public company for 12 months, having filed its IPO in September 2021. ON reported the equivalent of a €57.5 million loss despite a 70 percent local currency increase in annual sales to nearly €670.4 million.

Among the key findings:

Notes: * as established by www.fxtop.com.