Asics has announced the results of its inaugural Global State of Mind Index, which proves a direct positive link between exercise and mental health, but uncovers the worrying potential impact of lower levels of activity in younger generations across the globe.

The first-of-its-kind global study, which tracked the mental state of 37,000 people from 16 countries around the world, finds that people who move the most have a higher State of Mind score. Active individuals have an average State of Mind score of 68/100, in relation to just 56/100 for inactive ones.

The study also highlights dramatic differences in physical activity between generations, with older generations (those aged 57+) moving on average for almost one hour (53 minutes) more than Gen Z a week. This, in turn, is shown to be having a big impact on each group’s collective State of Mind score.

The study found that 54 percent of the global older population are active and feel the uplifting benefits, reporting an average State of Mind score of 67/100. In contrast, just 45% of the global Gen Z (aged 18-24) population are currently active and, as a result, have a considerably lower average State of Mind score than their older counterparts of 59/100.

The study also interestingly found that while the global population perceives 30 minutes as the minimum amount of exercise required to experience the uplifting impact of movement, new Asics’ research proves that just 15 minutes and 9 seconds of movement is all it can take to begin feeling the mood-boosting effects.

Dr. Brendon Stubbs, a leading exercise and mental health researcher from King’s College London who led the study, said: “There is a common perception that you need to move for a long time to experience the uplifting benefit. However, our new research proves this is not the case – just over 15 minutes of movement is actually all it can take to experience the positive impact. Coinciding with the State of Mind Index, which demonstrates the positive link between movement and mental health on a global scale like never before, we hope it will be inspiring for many to see the impact that such a small amount of movement can have.”

Inspired by its 15:09 finding, Asics now aims to get the world moving with the launch of a 15:09 Uplift Challenge, which will be kicked off by the 15:09 Uplift Ambassadors – Asics’ latest athlete signings with a difference. The club’s founding members – including the UK’s 10,000m World Champion (1991) Liz McColgan, Japan’s Olympic Marathon Champion (2004) Mizuki Noguchi, and USA’s Olympic Marathon bronze medalist Deena Kastor (2004) – are a celebration of the uplifted older generation’s approach to movement and exercise, as revealed by the State of Mind Index study results.

Tomoko Koda, Managing Executive Officer, senior GM marketing at Asics, said: “At Asics, it has long been our belief that sport has the power to uplift both an individual and the world like nothing else. While our global State of Mind Index results prove just how intrinsic the link between regular movement and positive mental health is, they also show the potential impact a small amount of movement could have in raising the world’s collective State of Mind. Our 15:09 Challenge sets out to do just that, calling on everyone to move and, in doing so, experience those all-important benefits first-hand. We’re delighted that our inspiring new ASICS 15:09 Uplift Ambassadors are going to be joining us in taking part in and sharing this challenge too.”

Asics is inviting everyone to participate in their own 15:09 challenge throughout June by moving for 15:09 minutes and sharing how they get on using #LiveUplifted.

Average State of Mind Index Score by country are as follows:

To learn more about ASICS’s State of Mind study and see the full results, visit asics.com/smsb-state-of-mind-index. 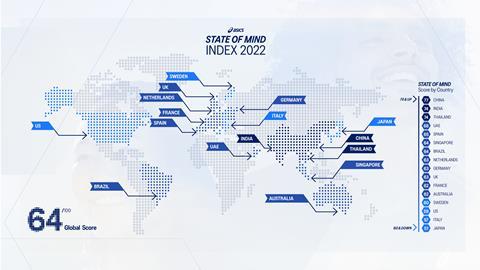