Women’s sneakers are booming on StockX

StockX has released a report on the resale market’s evolution since the company’s founding, in February 2016. Men’s sneakers continue to dominate resales, but the resale of women’s sneakers has been growing at a faster rate, having multiplied by a factor of 1,500 since the start. StockX says it now sells in four hours what it sold over the entirety of 2016. Last year more than 250,000 pairs of women’s Jordans – notably the Jordan 1 Retro High Satin Snake Chicago, Jordan 1 Mid SE Multi-Color and Jordan 1 Retro High Lucky Green – sold worldwide, for a 120 percent increase from 2019. In the overall sneaker resale market, StockX market share has risen by 800 percent for the Nike Air Max but fallen by 80 percent for the Adidas Ultraboost. The average resale price for the Yeezy 350 has fallen by nearly 50 percent, from $611 to $330. The most common “attempted” counterfeit models in 2016 were the Adidas Yeezy Boost 350 V2 Beluga, the Jordan 1 Retro Bred “Banned” and the Jordan 11 Retro Space Jam. In 2020 they were the Jordan 1 Retro High Off-White Chicago, the Jordan 1 Retro High Travis Scott and the Jordan 4 Retro Off-White Sail, this last being a women’s sneaker. StockX currently lists about 900,000 lifetime sellers, 120,000 product listings and 500 brands. In 2016 it topped out at 6,000 products by 17 brands. 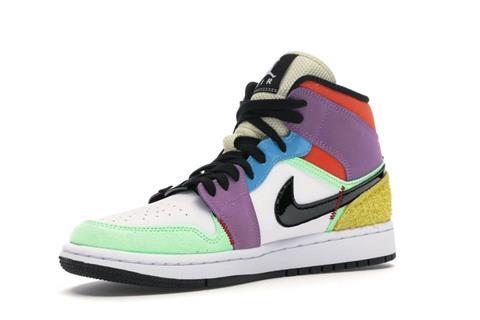