A game-changing foldable ski by Elan

Elan unveiled the world’s first foldable, high-performance, all-mountain ski on Feb. 1, the first day of the ISPO Munich Online show, where it got a prize as one of the ISPO Gold Award winners. Called the Elan Voyager, the ski can be easily disassembled and packed into a bag for transportation in a car, bus or airplane – a welcome benefit in view of rapidly changing travel regulations. The bag’s dimensions are compliant with hand-luggage requirements.

The package, consisting of a pair of Voyager skis, ski poles and travel bag, is offered to end consumers at a basic price of €1,500 or €1,600, depending on the size of the accompanying bag. The product will be available in three sizes for the next autumn/winter season at selected retail accounts that agree to display it properly in their stores.

The ski will be manufactured at Elan’s factory in Slovenia, which is currently closed for a month and a half until mid-March to prevent excessive inventory build-up, because of the difficult market situation created by the coronavirus pandemic, especially in Europe.

The situation is much better in the U.S. and Canada, pointed out Leon Korosec, head of Elan’s snow sports division, whose global sales already fell by around 22 percent in 2020. He said that it is difficult at this stage to forecast the rate of decline for this year.

The Voyager makes use of a revolutionary Connect Technology that Elan has been fine-tuning for years. It is based on an advanced four-axis mechanism that binds and seals the ski together at the folding point, combined with a carbon-reinforced fusion plate to support the load. The two components work together to provide torsional rigidity. The ski also features the latest version of Elan’s Amphibio technology, which integrates the rocker and camber profiles into dedicated left and right skis.

Like other producers in the snow sports sector, Elan has agreed to introduce only a few novelties for the next season and re-propose more than two-thirds of its existing product range, to help retailers clear their inventories.

As a real “game-changer,” its Voyager has already triggered a lot of interest, not only through its presentation in Elan’s virtual “brandroom” at the ISPO show. On top of its participation in the first digital edition of ISPO Munich, the company has been doing a lot more business with clients around the world through its own virtual meetings.

As previously reported, Ortovox won the top award at ISPO in the ski category with its avalanche transceiver. Other ISPO Gold Award winners, besides Elan and Ortovox, were:

- Earlybird with its sustainable Chickadee ski

- Deuter for its Freescape Pro backpack 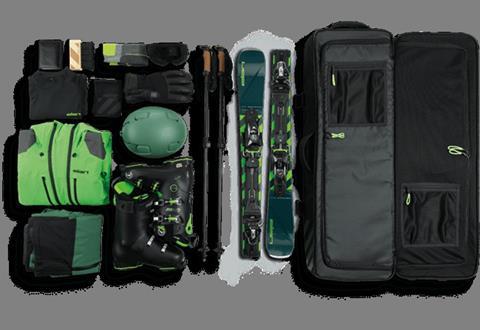