UA releases a running shoe with no outsole

Under Armour’s newest shoe, the UA Flow Velociti Wind, has eliminated the heaviest shoe component, the outsole, and substituted it with an “all-in-one cushioning system,” called the UA Flow midsole. According to the brand, this took three years of development by its Footwear Innovation Team in Portland, Oregon, and Dow Chemical. About 17 rounds of raw-material testing, nine rounds of biomechanical testing, 15 rounds of shoe testing and about 11,000 miles of wear testing by about 130 athletes have produced a “responsive, grippy, and supportive singular-foam compound.” The midsole made its debut in Stephen Curry’s signature shoe, the Curry Flow 8. The Velociti Wind contains the UA Warp, an upper with supporting tapes that “act like seatbelts on the foot”, tightening and relaxing as needed. A men’s size nine weighs 8.5oz (241g), a women’s size seven 8.02oz (227g). Once launched, on March 3, the shoe will sell at retail for $160 through UA.com, UA Brand Houses, and selected running shops and sporting goods stores. 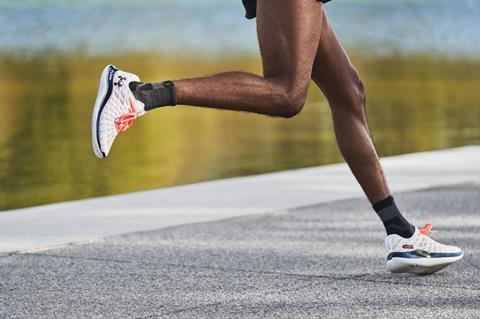