Sport 2000 reports that the seventh Absolute Run store opened on Feb. 4 in Germany. The owner of the store, which has been existing as “Laufsport Andreas” since 2006 in the city of Minden in North Rhine-Westphalia (80,000 inhabitants), is Petra Benecke, who has now reopened her store as “Absolute Run - Laufsport Andreas.”  The new shop offers about 220 square meters – twice as large as before the renovation.

In line with the Sport 2000 concept, the focus is on personal and competent advice as well as a high level of customer service. A 20-meter running track stretches through the new store, where footwear can be tested accordingly. The consultation is supported by modern iPad analysis technology in connection with foot pressure measurement by Currex. With Asics, Brooks, Currex, Hoka, Karhu, New Balance, On and Saucony, Benecke sells all the relevant running brands and offers the largest range of shoes and textiles in the region, Sport 2000 says. As in the six other Absolute Run stores (Bonn, Siegen, Bremen, Augsburg, Nuremberg and Dubai), activating the running community is also an important part of the concept. In Minden, this is implemented, among other things, through an extra community area with a coffee bar and the possibility of converting the sales area into an event space for lectures. 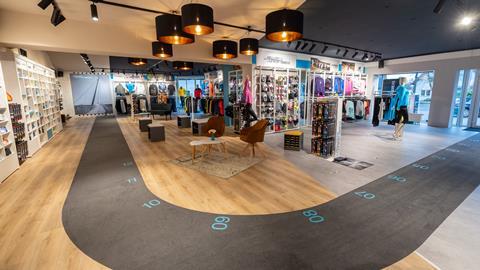