A wind of optimism from the Ispo Re.Start Days

Generally positive vibrations came from the Ispo Re.Start Days, the all-digital conference organized by the Ispo Group on June 30 and July 1, confirming the resilience of the sports and outdoor industry, especially in segments like running, fitness, cycling and outdoor. You can check the SGI Europe website tomorrow for some statistical data by NPD on the effect of the lockdowns in Europe and China.

Speakers and panelists at the online conference, many of whom spoke from their offices or homes, indicated that the Covid-19 pandemic has given brands and retailers a new chance to re-think their attitudes and strategies, particularly in the areas of digitalization, corporate responsibility and sustainability. It has also led more consumers to value sports as an antidote against stress and depression and as a barrier against all kinds of health problems.

Oliver Pabst, the chief executive of Mammut, said that the pandemic had created a “very special momentum, driving its employees to change their mindset and to embrace positive change after two-three weeks of uncertainty, and leading them to take faster decisions.” He said the crisis was an “accelerator” for digitalization and corporate responsibility.

Like other companies, Mammut continued to engage consumers with specific campaigns over the internet during the retail lockdowns. Schöffel produced movies to inspire people on how to overcome the crisis, minimizing physical contact and avoiding accidents in the midst of nature.

Like Schöffel and others, Columbia Sportswear held a virtual sales meeting that delivered a lot more benefits than would have stemmed from the planned physical meeting in Chamonix “at a fraction of the cost.” It’s all about agility and “adapting to the environment,” said Michael Levi, European sales manager of the group.

Stefan Herzog, the newly appointed president of the European Sporting Goods Retailers’ Federation (Fedas), said that the coronavirus crisis was “a tremendous boost for the sports retail industry when it comes to digital transformation.”

On Running, which operated on the internet since it started up ten years ago, invited specialty running stores to sell their products through its own website during the retail lockdowns. The operator of a running specialty store in Frankfurt that doesn’t have its own website, Laufshop, addressed its loyal customer base by organizing home videos for foot analysis relayed via Whatsapp, engaged with them over the phone and organized deliveries to their homes at a time when many people decided to engage in running instead of playing football or handball.

According to Accenture, the higher usage of the internet will lead to a more hybrid online/offline format in the organization of the staff’s work, retail operations and the customers’ relations with the brands and the retailers. The brick-and-mortar stores that will survive will tend to be more “experiential,” and brands may be asked to pay for the space dedicated to them.

Robbert de Kock, president of the World Federation of the Sporting Goods Industry (WFSGI), predicted that it may take one and a half years or even two years for a full recovery in the industry, despite the strong “revenge purchases” made at Austrian and German stores after the retail lockdown were relaxed.

He said he was afraid that many stores around the Alps that are dependent on winter sports will have a tough time toward the end of the year. Echoing his remarks, Michael Nendwich, managing president of Fedas, told us that he expects an overall drop of 10 to 20 percent this year in countries which, like Austria, depend a lot on winter tourism.

Talking about “brand purpose” and “branch purpose,” Marcel Beaufils of the Rheingold Institute encouraged sports brands to create a new “mood set” among consumers where they are perceived as helping to fulfill a vision. “The need for trust and a positive vision has never been bigger,” he said, indicating that brands can accompany consumers in this period of “defiance and grief” on the path of sustainability and “crisis-resistant” physical activity.

Christoph Engl, chief executive of Oberalp, said that consumers want brands to make them feel part of “a community of greater sense and purpose.” He also indicated that, instead of making big plans for the future, companies should make a daily effort to change, introducing new business models like the company’s recent, successful online convention.

Noting that 77 percent of consumers would not care if there were fewer brands, Tobias Gröber, a 23-year veteran of Ispo who is now in charge of all the consumer fairs of Messe München, said that brands should define themselves more through their purpose rather than just through their products. He added that trade shows and other services offered by their organizers should help brands to be more relevant, to present new solutions and to create valuable connections.

Some 1,000 people registered for the Ispo Re.Start Days before it began. The novelty of the event and resulting intense traffic on the internet was probably responsible for some technical glitches as the attendees tried to log into some of the speeches, panel discussions and interactive workshops, which involved more than 100 top executives and experts.

While continuing the tradition of the former Ispo Digitize convention, the two-day conference was going to include an originally planned, physical Ispo SDG Summit, discussing ways in which “the power of sports and the outdoors” could help implement the 17 Sustainable Development Goals (SDGs) of the United Nations.

Interviewed at his home in Bangladesh, Prof. Mohammed Yunus, the Nobel Prize winner who was going to lead the summit, expressed hope that more and more people and politicians will regard the post-Covid situation as a unique opportunity to stop doing the bad things that they did before and to create a “more socially and environmentally conscious world” for them, their children and their grandchildren. As they are admired by everybody, sports people should help spread this message of change and hope, he added. 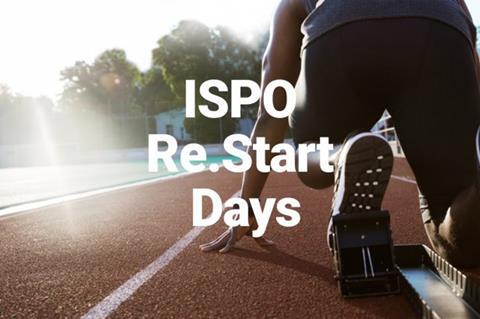