Eurobike will move from Friedrichshafen to Frankfurt in 2022

A new and more central location, new dates, new concept – only one thing remains: the organizing team of people involved in the project. To strengthen its market position and further develop its flagship trade shows in the areas of Urban Mobility and General Aviation, Messe Friedrichshafen, organizer of the Eurobike and Aero Friedrichshafen trade shows, is forming a joint venture with Messe Frankfurt.

One of the aims of this joint venture, named Fairnamic GmbH, is to “bundle the capabilities of the two companies in order to accompany the global mobility revolution, especially in urban areas, with the claim of being a world-leading trade fair.” Messe Friedrichshafen has a controlling stake of 51 percent in the joint venture, according to the Frankfurt daily Frankfurter Allgemaine Zeitung (FAZ).

Evidently, Eurobike’s original stress on mountain biking is getting lost, due in part to the recent boom in e-bikes, with the show’s move from a rural location to one of the largest cities in Germany. With the blessing of Shimano, the leading European trade show started in 1991 in Friedrichshafen, a small southern German town on Lake Constance.

From 2022 onward, Eurobike will be held in Frankfurt am Main. On the one hand, this is Messe Friedrichshafen’s response to the criticism that has been simmering for years that the Lake Constance region is not the most accessible location for a global trade show like Eurobike. The same criticism has led the former OutDoor show to move from Friedrichshafen on Munich, where it has been renamed OutDoor by ISPO. Describing Frankfurt as “the hub of Europe,” the two trade show organizers want to offer better accessibility to the Eurobike and Aero shows.

In advance of the change of venue, the organizers of Eurobike will hold a special preview of the main show in Frankfurt on July 24-26, 2021. Called “Eurobico – Order & Preview Show,” it is being held in collaboration with one of the major German bike dealers’ associations, BICO, addressing buyers and the media.

On the other hand, new competition from the International Motor Show (IAA Mobility), which is to be held in Munich for the first time next Sept. 1-4, certainly played a role in this strategic move. With its mutation in the direction of mobility, Messe München is also opening IAA up to the bicycle industry. In this connection, this year’s Eurobike, which is taking place in Friedrichshafen for the 29th and last time on Sept. 1-4, is being held under the slogan “Only Bikes. No Cars” to make a point of difference with IAA Mobility. As part of the joint venture announcement with Messe Frankfurt for 2022 and beyond, there is no longer any exclusive mention of bicycles, but of “urban mobility with the bicycle as the driving force.”

Like the earlier dates set for Eurobico this year, those chosen for  Eurobike in 2022 (July 13-17), with three days of trade shows followed by a festival weekend, are also intended to “take into account the industry’s changed production and order cycles.” In addition, the concept of Eurobike will change in terms of both content and staging. The ideal accessibility of the larger trade show location in Frankfurt, which offers growth prospects in terms of floor space and the number of participants, should be the new starting point for an authentic staging and thematic expansion of the bike mega-trend.

The managing director of the German Bicycle Industry Association (ZIV), Burkhard Storck, commented on the cooperation between the two trade show companies: “I’m sure that with these changes, Eurobike will continue to be and remain the world’s leading trade show for bicycles in the future.” ZIV is an official partner of Eurobike – and also sees the change of location to Frankfurt a.M. as a “coming home.” The forerunner of the former Ifma trade show in Cologne was once – a long time ago – at home in the metropolis on the Main river. 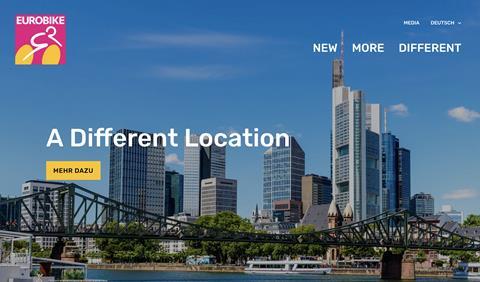