VF Corp. allocates the proceeds from its Green Bond

VF Corp. has released its Green Bond Impact Report, in which it shows that the net proceeds of around €493 million from its inaugural Green Bond have been fully allocated to 13 of VF’s eligible sustainability projects worldwide, including 2 million trees planted, around 16,000 metric tons of CO² emissions avoided annually through the procurement of sustainable materials, and more than 970 million liters of water saved annually through conservation initiatives. The biggest portion of the proceeds, €243.5 million, will go into the development of recycled materials, followed by €162.8 million for sustainable cotton. VF issued its inaugural Green Bond, which it claims to be the first for the apparel and footwear industry, in February 2020 in accordance with the Green Bond Principles 2018 of the International Capital Market Association (ICMA). VF’s Green Bond Framework was reviewed by Sustainalytics, a global provider of sustainability research and services, which declared that the framework is credible and impactful. The allocation of the green bond’s net proceeds was “an important step” in the implementation of the company’s ”Made for Change” sustainability and responsibility strategy, VF said in its release. 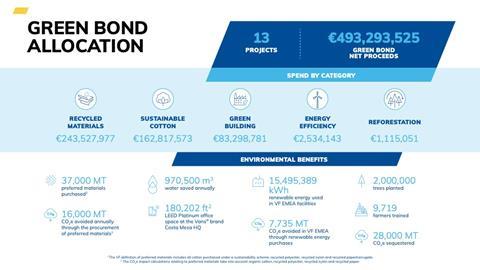